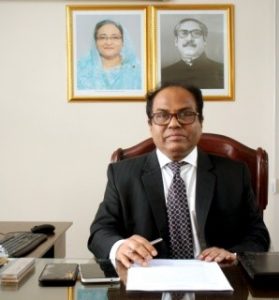 Professor Dr. Rafique Ullah Khan (born on January 21, 1957) is a Bangladeshi scholar, researcher and literary critic. He is professor of the Department of Bangla, University of Dhaka. His area of expertise is Bangla novels and modern poetry. Other major area of interest with publications are- Michael Madhusudan Dutta, Rabindranath Tagore, Kazi Nazrul Islam and Hasan Hafizur Rahman. For the overall contribution of the study, he received the Bangla Academy Literary Award in 2017. He was awerded Khalekdad Chowdhury Literary Award in 2019. In national and international fields, he is actively involved with various educational and research institutes. Presently, Dr. Khan is acting as the first Vice-Chancellor of Sheikh Hasina University, Netrokona.

Dr. Rafique Ullah Khan was born on January 21, 1957 in the village of Chor-Gobindapur in Manikganj district. Father’s name is AKM Saiful Islam Khan. He was a teacher, a doctor and acted as the founding Principal of Homeopathy College. His mother Nurunnahar Firoza Khanam was a teacher and writer. His parents both of them used to play literature. Nurunnahar Firoza Khanam’s My dream, my struggle (2015) is an educative rural life story of women. In the year 1946, the ‘Gole-Monir Junior Girl’s School’ was established by her for the expansion of women education in countryside in West Manikganj. Dr. Khan is the third among nine brothers and sisters.

Dr. Rafique Ullah Khan’s education started in a village primary school. He passed Secondary Examination from Doptior High School of Nagarpur in 1972. He passed the Higher Secondary Examination in 1976 from Sherpur Degree College, Bogra. In 1980, he completed his graduation with brilliant result, from the department of Bangla, University of Dhaka. In 1981, he got first position in first class in MA examination. From 1983-1985, as a scholarly researcher of Bangla Academy, he completed research on ‘Hassan Hafizur Rahman : Life and Literature’. In October 1985, he joined permanently as a lecturer at the Department of Bangla, University of Dhaka.

Dr. Rafique Ullah Khan started his career as a scholarly researcher of Bangla Academy in 1983. At the end of the year he was appointed to the Bangla Academy’s research. He published his research work Hassan Hafizur Rahman : Life and Literature. Before joining the university as a Lecturer in 1985, he wrote two books on Michael Rabindranath and Others (1985) and Poetry and Society (1985). The books are published from the Bangla Academy. He gained fame from his student life in literary pursuits and writings. Before joining as a Lecturer, he wrote hundreds of essays in research and creative journals. He did his Ph. D on ‘ Novels of Bangladesh: Theme and Structure (1947-1987)’ from University of Dhaka. He is currently the Joint Secretary of the Executive Committee of the International Society of Bengal Studies, General Secretary of the Bangladesh Chapter: International Society of Bengal Studies. He was also the Director of Bangladesh Cultural Research Center, University of Dhaka (2013 to 2018).